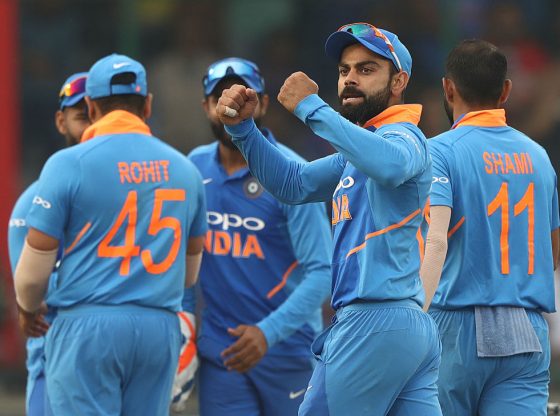 Second only to England in the International Cricket Council’s rankings for ODI teams, and by a mere four points, India are among the frontrunners to win the 2019 World Cup. They won it in 1983 and 2011 and, with a wealth of resources gathered from a hugely populated and cricket-mad nation, are well poised to claim a third title.

Like opener Chris Gayle for the West Indies or England’s Jason Roy, captain Virat Kohli is prolifically influential – and the kingpin on which the campaign will be built. He is the number one-ranked ODI batsman at the moment – and in opener Rohit Sharma they have the second, too. India, too, have dynamic bowling resources – and have fashioned a threatening pairing in leg-spinner Yuzvendra Chahal and left-arm wrist-spinner Kuldeep Yadav. Others, like South Africa with the in-form Imran Tahir and inexperienced Tabraiz Shamsi, have taken example, but to substantially less successful extent.

Batsman to bank on

Kohli and Sharma, yes, but overlooking opener Shikhar Dhawan as India’s lead batsman would be shortsighted. Dhawan, like several others, will head into the World Cup on the back of a solid Indian Premier League campaign, where he partnered New Zealand’s Trent Boult, West Indian Keemo Paul and others. Dhawan’s ODI average in England is over 65 – almost 20 runs more than a career aggregate of under 45.

Bowler to bet on

Recently heralded as the “best bowler in the world at the moment” by Indian cricket legend Sachin Tendulkar, seamer Jasprit Bumrah might not match this big billing, but will likely come quite close. Recent form has shown him to be the master of the yorker – and exactly the kind of resource bowling departments need at the so-called death of the innings. If he doesn’t take a substantial number of wickets, an attractive economy rate is probable – or vice versa, if not both.

The final fixture of June will see India clash with England at Edgbaston in Birmingham in what could be a prelude to the final at Lord’s in London two weeks later. The tournament hosts and number one-ranked ODI team against a star-studded Indian outfit makes for an enticing prospect.

India should comfortably secure a semi-final berth and eventually be one of the top two, if not the new champions. One or two defeats during the round-robin fixtures won’t be entirely untoward, instead motivating them to go all the way, regardless. Kohli is effectively the face of the hunger for the title – and vital to whether India will be able to sate this.