John Vlismas in New One Man Show, ‘The End’

Home /Lifestyle/John Vlismas in New One Man Show, ‘The End’ 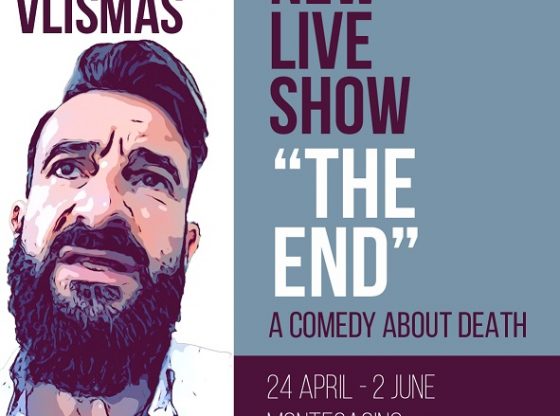 John Vlismas has poked fun at most of the dark horses in our collective
mental stable. He has touched racism on its studio, wrapped his tongue around the human brain, and even goosed God as they passed each other in the passage. 2018 was a tough year for John Vlismas, as he lost one of his favourite human beings on Earth Loss is a theme most of us don’t see as one to write a new hour of comedy about – but John isn’t most of us.

“The End” is by far his most personal, raw, dark and deeply funny show. He will take you into the psychology of death, illustrate the lengths we will go too to pretend it won’t happen and finally take you to the site of his beloved Dad’s last breath. You may think John Vlismas is a mad man, but he proves in this show that he is determined to go right into the darkness of the human condition and find humour deep inside – where nothing is supposed to be funny.


“I’ve always said that the best comedy is horror’s neighbour. Safe comedy is offensive to me – like alcohol-free beer. The ultimate horror is our own death, mostly because we have grandiose ideas of self as a species. If there is a heaven – why are funerals possibly sad? Because deep down, we all know that it’s The End.”

Book to see “The End”, it will make you glad you’re alive.

“Nanette” by Hannah Gadsby and “Annihilation” by Patton Oswalt were huge influences on John Vlismas recently. They stopped looking for approval and spoke from the heart. They reminded him that it’s okay to be profound. What do cheap laughs add to the world? There are only about 5 unique jokes anyway, the rest is in the dressing.

John Vlismas had a backstage conversation with Conrad Koch a while back – he’s a smart guy. They agreed that stand up needs to be broken. Gadsby
and Oswalt have done that. Pieter Dirk Uys once told him to lay the fluff – he was spot on.

That’s what “The End” will be. Still dark, still uncomfortably funny – but also
personally honest. Come and watch it, you might feel something.”